Ebola Alert in India : Are we prepared to tackle the deadly virus ?

EBOLA has been declared as International Emergency including India. Facing the worst known outbreak of the Ebola virus, with almost 1,000 fatalities in West Africa, the World Health Organization declared an international public health emergency on Friday, demanding an extraordinary response.

Since Ebola outbreak is putting all of us at risk it is essential we should know what is EBOLA and the precautions required to face the deadly virus..

What is EBOLA?
It is a virus that attacks a person blood system:
Ebola is what scientists call a hemorrhagic fever - it operates by making its victims bleed from almost anywhere on their body.Usually victims bleed to death.


( Hemorrhagic: Pertaining to bleeding or the abnormal flow of blood.
The patient may have an internal hemorrhagic problem that is not be visible or the patient may have an external hemorrhagic problem that is therefore visible on the outside of the body.The term "hemorrhagic" comes from the Greek "haima," blood + rhegnumai," to break forth = a free and forceful escape of blood.)
Ebola is highly contagious;It is Being transmitted via contact with body fluids such as blood, sweat, saliva,semen or other body discharges.

Ebola is however NOT AN AIRBORNE VIRUS!.
EXTREMELY deadly:About 90% of people that catch Ebola will die from it.It's one of the deadliest diseases in the world,killing in just a few weeks.
It is Untreatable (not curable):Ebola has no known treatment or cure.Victims are usually treated for symptoms with the faint hope that they recover.

How Do I Know Someone has Ebola? - Symptoms include:-
•Fever
•Headache
•Diarrhoea
•Vomiting
•Weakness
•Joint & Muscle pains
•Stomach Pain
•Lack of Appetite

One should Protect Oneself in following manner :
- Wash Your Handswith Soap. Do this a lot. You can also use a good hand sanitizer.


- Avoid unnecessary physical contact with people.
- Restrict yourself to food you prepared yourself.
- Disinfect Your Surroundings
-The virus cannot survive disinfectants,heat, direct sunlight,detergents and soaps.

Clean up!:
•Fumigate If you have Pests.
•Rodents can be carriers of Ebola.
•Fumigate your environment & dispose off the carcasses properly!
•Dead bodies CAN still transmit Ebola. Don't touch them without protective gear or better yet avoid them altogether.Protect Yourself:


•Use protective gear if you must care or go near someone you suspect has Ebola.

Report:
•Report any suspicious symptoms in yourself or anyone else IMMEDIATELY. Do not delay!

Educate Everyone:
•Tell your neighbours,colleagues and domestic.staff (anyone really). " Basically you're safer when everyone is educated."

Here is the News on EBOLA as mentioned in India Today vis-a-vis the Do's & Dont's . Please click this link:-
http://indiatoday.intoday.in/gallery/ebola-outbreak-india-on-alert-airports-symptoms/1/12417.html#photo5.

Now the entire media and newspaper is full with EBOLA caution. I feel EBOLA is more dangerous than AIDS. AIDS is not contagious. But EBOLA is deadly contagious. Even the dead body is contagious. US is getting break though in treatment. But mass medicine will take time.
United Nation has declared it as International Emergency. Three authentic sources of information, NY Times, The Guardian and Dainik Bhaskar(Bhopal edition 09.08.14 in Hindi) are attached for information.
One should not Panick, it is Just for precaution and prevention. Because "Prevention is always better than cure".. 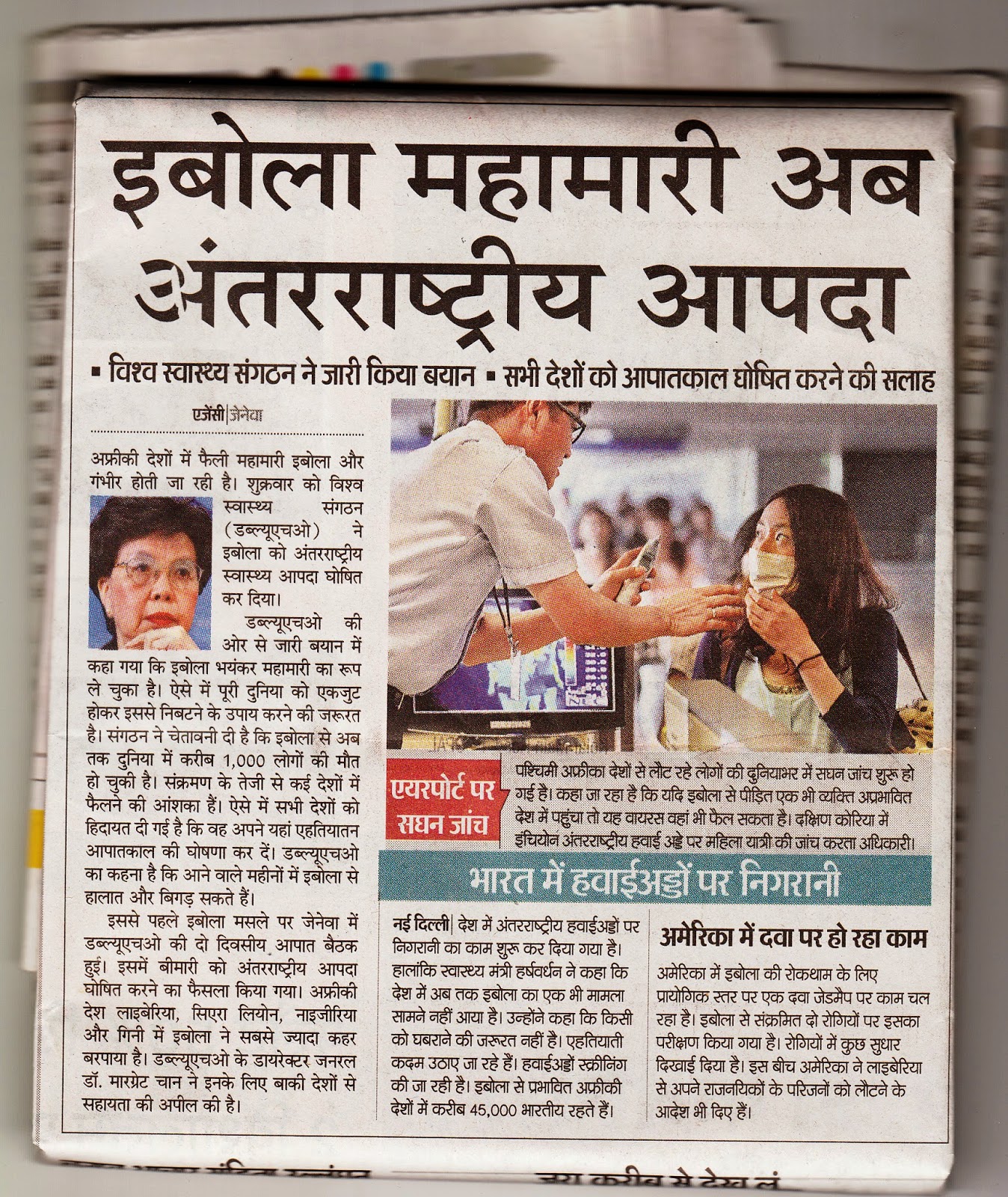 PS:
"QUOTE "
( Source:Discovery News 2nd Aug 2014.:-)
No current treatments
This Ebola outbreak is the largest in history and has so far claimed 729 lives in Sierra Leone, Guinea and Liberia. Doctors without Borders has said that the crisis is "out of control." Sierra Leone has declared a national emergency, closed all of its schools and is quarantining disease hot spots. [2014 Ebola Outbreak (Infographic)]
There are no treatments or vaccines available for Ebola, though several are in the pipeline. A study in Nature this year reported that one drug improved survival in monkeys who were exposed to a closely related virus, called Marburg virus. Public Health Canada is testing another antibody-based treatment and the company Tekmira Pharmaceuticals has developed an experimental drug that uses a process called RNA interference to block the virus' replication, Forbes reported.
However Research work is going on for developing antibodies like ZMAPP Serum etc for curing EBOLA, but it is in very primitive stage. You all may refer to various articles in "Speaking of Research."
"UNQUOTE"
at August 09, 2014 No comments: