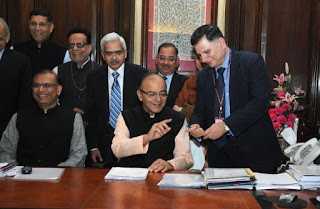 Finance Minister Arun Jaitley on Monday provided relief to small tax payers and nudged the affluent to shell out more while focusing on the rural economy with much higher fiscal outlays, as he presented India's national budget for 2016-17 in the Lok Sabha. A few points that stand out in this year's budget are:
1.

The government aims to double farmers' income in 5 years. As much as Rs 35,984 crores has been allocated for their welfare. About 5 lakh acres will be be brought under organic farming over three years. Nominal premium and highest ever compensation has been announced in case of crop loss under the PM Fasal Bima Yojana.
2.

One of the most significant things in Budget 2016 is the massive push to enhance irrigation.

A dedicated irrigation fund worth Rs 20,000 crores to be set up under NABARD. Now, there is a determined move to complete all programs within a specified period and monies have been allotted for that.
3.

Budget 2016 calls for a huge push in public investment in roads, in both the rural and urban areas.

85 per cent of stalled road projects are back on track; 65 eligible habitats are to be connected via 2.23 lakh kms of road. The current construction pace is 100 km per day. Allocation of Pradhanmatri Gram Sadak Yojna is to be increased to Rs 19,000 crores and Rs 97,000 crores has been allocated to the road sector including PMGSY.
4.

Budget 2016: New health insurance scheme to be announced during the year.

Health cover of up to Rs 1 lakh per family and additional Rs 30,000 for senior citizens is to be provided. 300 generic drug stores will be opened under the PM Jan Aushadi Yojana. National Dialysis Services Programme will be launched. Tax exemptions will be given to certain parts of dialysis equipment. This is in addition to the crop insurance scheme.
6.

Budget 2016: Government promises 100% village electrification by May, 2018. One-third of that target has already been achieved.

Budget 2016 calls for providing regulatory architecture to 10 public and 10 private institutions to emerge as world class teaching and research institutions.

A Higher Education Financing Agency will be set up with an initial capital base of Rs 1,000 crores. A Digital Depository will be set up for educational certificates, mark-sheets, awards etc. 62 new Navaodaya Vidyalayas will be opened in the remaining uncovered districts in the next two years.
8.

The constitution of a committee to see how the nation's growth can be sustained in the wake of the global economic slowdown.

A committee will be set up for the review of Fiscal Responsibility and Budget Management (FRBM) Act.
9.

A technology driven platform for government procurement of goods and services will be set up by the Directorate General of Supplies and Disposals .

This will improve transparency, efficiency and reduce the cost of procurement.
10.

Budget 2016: Removal of plan/non-plan classification of expenditure from 2017-18. 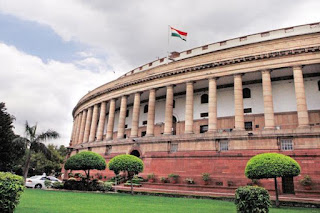 A well-devised process to hear the voice of every lawmaker in Parliament is laid down in the constitution.
How do MPs seek answers from government?
The ‘ Question Hour’— an hour long question-answer session —is held every day during which any MP, who is not a minister, can ask questions.
Which questions are replied to orally?
Only starred questions, the ones that are marked with an asterisk, are given an oral answer. Unstarred questions are replied to in written form.
Can members raise issues whenever they want?
No. Members need to give a notice to the Speaker of Lok Sabha or the Chairman of Rajya Sabha (depending on which House they belong to).
Can there be voting after a discussion?
Discussions in Lok Sabha and Rajya Sabha entail a division or voting at the end of the debate. But the Opposition has to give proper notice to seek voting. Can MPs raise issues related to their constituencies?
Yes. After Question Hour comes Zero Hour in which members are free to raise issues of their choice. The House can also hold Short Duration discussions on important national issues like they did on the JNU controversy. In short duration discussions, ministers are bound to reply orally to queries.

The process that begins with the presentation of the Budget and ends with discussions and voting is a long one. With the government set to present the Budget for 2016-17 on Monday, HT explains the constitutional and parliamentary intricacies of the exercise:
All about the bills
Appropriation Bill
This is the law, stipulated under Article 114 (3) of the Constitution, which the government uses to make withdrawals from the Consolidated Fund.
Finance Bill
Every year the government imposes new taxes, abolishes some old ones, changes regulation and alters some existing income taxes. These are carried out by passing the Finance Bill. Parliament has to pass the Finance Bill within 75 days of its introduction.
What happens if it isn’t?
It is seen as a vote of no confidence against the government.
Money Bills
Bills that exclusively contain provisions for imposition and abolition of taxes, for appropriation of moneys from the Consolidated Fund, etc, are certified as Money Bills.
Money Bills can be introduced only in Lok Sabha. The Rajya Sabha cannot make amendments in these but only recommend amendments and return the bills to Lok Sabha within 14 days of their receipt. The Lower House may then accept or reject these recomm
endations.
A money bill is deemed as passed by both houses if:
1 Rajya Sabha does not return them to Lok Sabha within 14 days.
2 Lok Sabha rejects the recommendations of Rajya Sabha. In these cases, the bill is deemed as passed in both Houses in its original form.
3 Lok Sabha accepts some Rajya Sabha recommendations and re-passes the Bill. The revised bill is deemed as passed in both houses.
Finance Bill and Appropriation Bill are some categories of Money Bills.
Annual financial statement
The Annual financial statement document shows the government’s estimates of earnings and spending for the year, compared to the previous year. These are shown under the three parts in which government accounts are maintained:
Consolidated Fund
Article 266 of the Constitution mandates that Parliamentary approval is required to draw money from the Consolidated Fund. All earnings of the government, its borrowings and also repayment of past loans it has given, form the Consolidated Fund.
Contingency Fund
Article 267 mandates that Parliamentary nod is needed to draw money from Contingency Fund. The present corpus of the Contingency Fund is Rs 500 crore. It is an imprest or emergency pool of resources to meet urgent unforeseen expenditure.
Public Account
Government holdings in trusts such as provident funds and money set aside for schemes such as roads and education are kept in Public Account (Article 267). The Public Account have to be paid back to depositor, so such expenses don’t need parliamentary nod.
Demand for Grants
Article 113 of the Constitution mandates that all expenditure from the Consolidated Fund be voted on by Lok Sabha. The government submits its expenditure proposals in the form of Demands for Grants, for the Parliament’s consideration
Each department places demands for grants, which are placed in Lok Sabha along with the Annual Financial Statement.
Source: Hindustan Times
at February 28, 2016 No comments: Links to this post 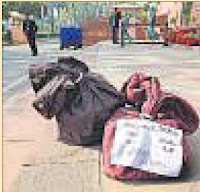 What is the Economic Survey?
The annual Economic Survey is presented a day before the presentation of the annual budget. It serves as the official report of the economy, which the finance minister tables in Parliament. This year, the survey was tabled on Friday, the last working day before the budget’s presentation on February 29, 2016.
What does it contain?
The survey serves as the government’s view about the economy’s current state. It gives an overview about all sectors of the economy carrying indepth assessments backed by research. The survey’s outlook about each sector is muchwatched out for as it serves as a guide about which way the policies are likely to move.
What about the projections?
The survey puts out growth projections about the economy articulating reasons why the economy was likely to gather pace or slow down. For instance, this year, the survey has forecast that India’s gross domestic product (GDP) will grow at 7-7.75% in 2016-17. This is a cautious projection given that GDP is set to grow at 7.6% in 2015-16.
Does the survey recommend policy changes?
Most survey recommends policy changes, sometimes radical transformations that can be politically sensitive. The commentary accompanying each sector includes suggested measures. This year, for instance, the survey has suggested widening the tax base and bringing more individuals under the tax net.
Are these recommendations binding?
These recommendations are not binding and only serve as a guide of the official line of thinking. On many occasions, such recommendations have not always found reflection in the budget.
Who drafts the survey?
The chief economic advisor (CEA) is the principal author of the survey. This year’s survey has been piloted by CEA Arvind Subramanian and his team.

Who is Qualified Institutional Buyer (QIBs)?

These entities are not required to be registered with SEBI as QIBs. Any entities falling under the categories specified above are considered as QIBs for the purpose of participating in primary issuance process.
Equity offers: Terms you must know
Source: The Hindu - Business Line